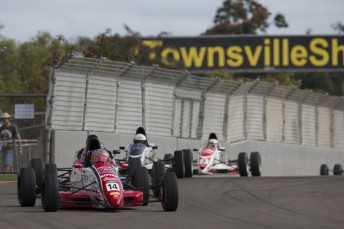 Jones took a clean sweep of all three races in Townsville

Macauley Jones has carried his good form over to Sunday at the Sucrogen Townsville 400 to sweep the second round of the 2013 Australian Formula Ford Championship.

After a nail-biting race one victory on Saturday, Jones was in imperious form today and converted his front-row start to a comfortable race two victory, before doing the same in race three.

It’s the maiden overall victory for the son of V8 Supercars team owner Brad Jones and the first of the year for the CAMS Rising Star / Minda Motorsport squad.

Jones’ perfect score of 60 points has seen the Albury youngster elevated him from fifth to second in the championship, now just six points behind round one winner and points leader, Anton De Pasquale.

The 17-year-old Luke Marquis placed second overall with finishes of second, fourth and second across the three races, respectively.

Despite some round dramas, Sam Power holds third in the championship standings after two of seven rounds.

Liam Sager just missed out on a round podium finish with a non-finish in race two costing the CAMS Rising Stars driver.

Luke Marquis, Jordan Lloyd and Simon Hodge are all within three points of Sager in sixth, seventh and eighth respectively. Matt Campbell and Thomas Randle complete the top ten in the standings ahead of the next round at the Coates Hire Ipswich 300 on July 27-28.