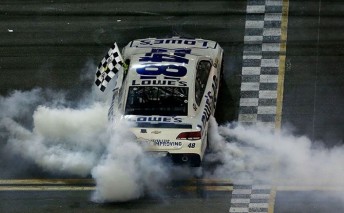 Jimmie Johnson has backed-up his win at the Daytona 500 with victory at the Coke Zero 400 at the same track.

With less than five laps to run Johnson was battling with Marcos Ambrose and Kasey Kahne – with the Australian avoiding Johnson and making contact with Kahne sending him into the inside wall.

Ambrose had to come to the pits to pull bodywork off the wheels and change tyres.

On the green-white-chequered run to the flag he was then involved in one of two multicar wrecks on the final lap and was classified 26th at the finish.

“Jimmie got a little loose or he just didn’t see my move coming, and I split him coming off of two,” Ambrose recounted post-race.

“He came down to check the spot and I was already there and he just bounced us straight into the 5. That’s plate racing. We’re all trying to win.”

Johnson is the first driver since Bobby Allison in 1982 to win both Daytona races in the one season.