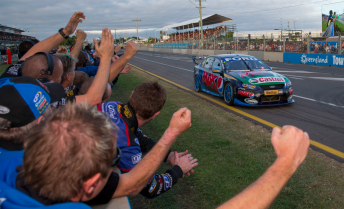 Will Davison, Ford’s only repeat winner of the 2013 V8 Supercars Championship, believes it is crucial for the category that the Blue Oval remains in the sport.

FPR are continuing negotiations with Ford who are yet to make a decision on whether it will continue to fund the V8 venture after announcing it will stop manufacturing the Falcon from 2016.

When asked what message a one-two finish sends to the car company, Davison said the Ford fanbase would remain loyal no matter what model maybe sought for a Falcon replacement if the factory wants to remain in the sport.

“People forget over the years there were Sierras and Mustangs and Falcons,” Davison said of the history.

“I’m sure the fanbase will still come out and support it (whatever Ford decide to race if a replacement for the Falcon is sought).

“It doesn’t just benefit us and FPR it benefits the whole category (if Ford remain).

“It’s very important they remain in the category. It’s such a big part of our sport. The fanbase is 50 percent blue whatever you want to call it or whatever the model is.”

Winterbottom added that while it was nice to record decent results, wins are not the sole reason for a brand’s involvement.

“Obviously the team is negotiating (future with Ford) but there’s a lot more to it than just winning races I guess,” he said.

“It’s important for Ford to get good results at this time of year but it’s not the be all and end all. When you see the fans on the side of the track.

“There were so many blue flags on that in lap. A one-two means more to them than anything. If they go and buy some more cars it might help keep the blue oval badge on the front (of the racecars). It was nice to see the blue oval fans.

“We’ve really needed that. A one-two is a pretty dominant performance by the team.”

Ford Australia does not have any representatives at the Townsville event this weekend.