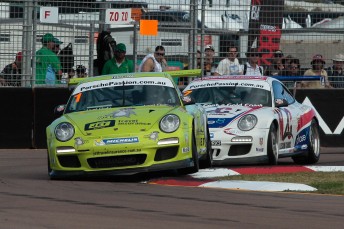 Gold Coast-based driver Craig Baird marched triumphantly to yet another clean sweep in Round 4 of the Carrera Cup Australia Championship at Townsville.

Baird (Jet Travel Insurance) stormed away to record another win in Race 3 around the Reid Park street circuit and extend his lead in the one-make Porsche series.

Warren Luff, driving the No Second Chance entry, scored his best result of the weekend in second while Steven Richards (Laser Racing) claimed his first podium of the round in third.

Nick Percat (Coates Hire) struck trouble on the opening lap and was eliminated from the race with what appeared to be radiator and wheel damage. Percat had been runner-up to Baird in the opening two heats.

Richards had an intense battle with Michael Patrizi for the final podium slot however the latter had to settle for fourth in the Ausdrill car.

See below for full results for Carrera Cup Race 3