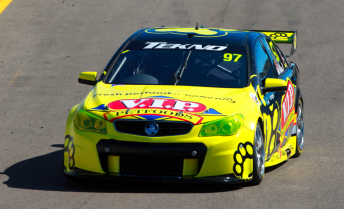 Van Gisbergen edged his Tekno Holden 0.06s ahead of Mark Winterbottom’s FPR Ford as the chequered flag flew on the 20 minute session.

Winterbottom and eventual third placed man Fabian Coulthard had sat atop the sheets heading into the final minutes after completing early final runs while the track was clear.

The hard tyre only session was the first clear indication of the relative speed of the cars this weekend following a typically mixed five practice hit-outs.

James Courtney, Will Davison and David Reynolds all improved with their final qualifying efforts for fourth through sixth, while an early time from Jason Bright held up for seventh.

Scott McLaughlin, Tim Slade and Alex Davison complete the Shootout field, while Rick Kelly narrowly missed out on ensuring all marques are represented in the Top 10.

The biggest story, however, was the disappointment at Red Bull after Craig Lowndes and Jamie Whincup managed just 12th and 16th respectively.

The duo took the flag line astern at the end of the session, with Lowndes marginally improving as Whincup continued to struggle.

The Holden Racing Team’s Garth Tander also had a disappointing run and will start 15th.

Soft tyres will be permitted in the Top 10 Shootout, which is set to take place at 1310 local time.