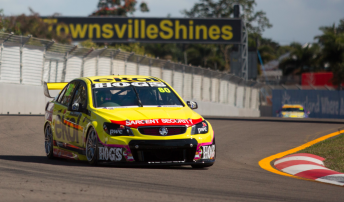 Pye sits 25th in points ahead of Race 20 in Townsville

Team owner Lucas Dumbrell is backing Scott Pye to put in a solid performance this weekend despite admitting that he considered replacing the rookie ahead of the Townsville event.

Having finished an impressive second in the 2012 Dunlop Series with Triple Eight following a two-year stint in European open-wheel racing, Pye has endured a rocky start to his tenure in the V8 Supercars Championship.

A promising season opener in Adelaide, where he vied for top 10 finishes, was quickly followed by major accidents at Symmons Plains and Barbagallo.

With Dumbrell’s frustration at an all-time high after further damage in Darwin, Pye’s car was sent to Queensland alongside the sister Holden of Dean Fiore, which had required major work at Triple Eight’s headquarters following its own Sunday crash.

Pye’s car received a full set-down and analysis at Triple Eight before being prepared for Townsville at Paul Morris Motorsport’s workshop.

Although pre-event speculation suggested that Lucas’ brother Paul, the reigning Bathurst 1000 winner with Triple Eight’s primary outfit, could have been called in for Townsville, the team owner moved to downplay the seriousness of that prospect.

“It has been very frustrating for me and all the team members, the crashes and lack of pace,” Dumbrell told Speedcafe.com when asked of Pye’s form.

“It crossed my mind (to bench Pye for Townsville) but we never got to the point of doing it, it was more just a thought I’d had out of frustration.

“Now we know everything is 100 percent with the car, we’ll see where we end up this weekend.

“We know the car is good and where it needs to be. It’s up to Scott and the whole team to get a result.”

Emphasising the importance of Pye’s respect of the team and its equipment, Dumbrell added that he is not expecting more serious talks to be required with the 23-year-old following Townsville.

“Scotty has been working on the car with the guys for the last week or so and I think he’s made a real effort to get involved,” he said.

“He understands now how hard it is for them and how much work they put in.

“The guys need to know that the driver appreciates their work. It’s not a game for them (the team members) to make big money, it’s more of a love and a passion for them.

“As for the rest of the season, I don’t think I’ll be having that thought (about replacing Pye) again, because I hope and believe that he can do the job.”

A driver change prior to Townsville would not have been unprecedented for LDM following Daniel Gaunt’s axing prior to the North Queensland round in the squad’s maiden season in 2010.