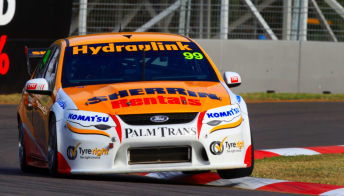 Steve Owen on the way to victory

Steve Owen scored his first Dunlop Series race victory in three years at the end of a bruising opening race in Townsville.

Starting from pole position, Owen let the drama unfold behind him, driving into the distance during the early laps to open a 3.5 second lead prior to the Safety Car being called on Lap 6.

Owen would prove too good over the remaining laps following the restart, taking the flag 1.6s ahead of Wood.

The restart proved disastrous for Gaunt’s Eggleston Motorsport team-mate Jack Perkins, who was turned around by an out-of-control Cameron Waters.

Perkins squandered his front-row start with a poor getaway, but appeared to have superior speed to Gaunt prior to the Safety Car. He eventually saw the flag in 18th, despite falling to a low of 27th after the tangle with Waters, who in turn finished 28th after serving a drive-through penalty.

The restart squeeze also claimed Casey Stoner, who was forced to pitlane after his Red Bull Holden took left-front damage in a squeeze involving Taz Douglas at the exit of Turn 2.

Douglas was also involved in two separate incidents with Andre Heimgartner; making contact with the rear of the Finance Ezi Ford on both occasions.

The first contact pushed Heimgartner wide and out of a fine fifth place in the opening laps, while a late-race tap spun the Kiwi completely.

The latter incident allowed Ash Walsh to sneak into 10th place, ensuring him pole for Race 2.

The Matt Stone Racing Ford driver had cut his way through the pack from the back of the grid after a power steering failure crippled his qualifying efforts.

Further back in the field, Aaron Tebb’s ex-Kelly Racing Holden suffered heavy damage after a tangle and subsequent failure pitched the youngster into the concrete at the exit of Turn 6.

A further two races on Sunday will complete Round 3 of the Dunlop Series.