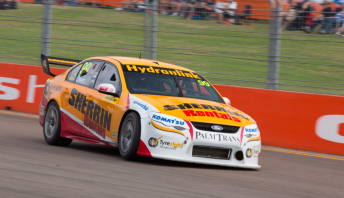 Dunlop Series pace-setters Steve Owen and Ashley Walsh will start from opposite ends of the grid in Race 1 at Townsville after disaster struck the series leader in qualifying.

Walsh suffered a power steering failiure on his first flying lap in the session and was unable to return to the circuit during the remainder of the 30 minutes.

The Matt Stone Racing Ford therefore did not set a time and will start the opening race from 30th.

Owen meanwhile dominated proceedings, with his fastest time proving 0.45s quicker than that of the next best, Jack Perkins.

The only real drama for Owen occurred when Marcus Zukanovic swerved in front of the twice series winner while warming his tyres mid-session.

Cameron Waters will start seventh despite a spin at Turn 8 late in the going, while Andre Heimgartner, Andrew Jones and Aaren Russell completed the top 10.

Casey Stoner will start Race 1 from 11th after failing to improve on his second and third runs.

The former MotoGP World Champion repeatedly caught traffic at crucial moments in addition to running off at Turn 3 on his penultimate lap.

The first of three Dunlop Series races for the weekend will be held at 1235 local time.