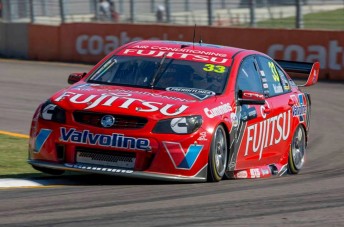 Scott McLaughlin has continued his strong form in Townsville during an incident-packed final practice session prior to Race 20 qualifying.

The Fujitsu Racing GRM Holden driver topped the 30 minute hit-out after a succession of fast-laps mid-session.

A red flag with just five minutes remaining to retrieve the stranded Wilson Security Holden of David Wall then promised to produce a late flurry of qualifying simulation laps.

It was only James Courtney, however, who could challenge the top two, with the Holden Racing Team Commodore splitting the pair on his final lap.

James Moffat also found himself in the wars, becoming the first driver to contact the street circuit’s concrete with a tap on the Turn 12 exit fence mid-session.

The Norton-backed Altima also spun at Turn 13 in the dying moments, just seconds after team-mate Todd Kelly nosed into the barriers at Turn 8.

Wall’s incident however was the most dramatic of all; the BJR Holden coming to rest in the tyre wall after an apparent front-end failure entering the high-speed Turn 5.

As was the case on Friday, differing pre-marked tyre banks muddied the final order, with the top runners having all enjoyed runs on soft tyres left over from previous events.

Jamie Whincup continued his low-key weekend so far in ninth having been the only driver who elected not to return to the track following the red flag.

Teams have just over two hours to turn their cars around for qualifying, which will be followed by a Top 10 Shootout and a 200km race later this afternoon.