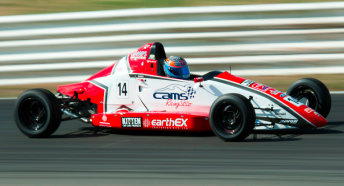 The win is Jones’ first in the Australian Formula Ford Championship

An exciting final lap battle has seen Macauley Jones win his first ever race in the Australian Formula Ford Championship.

Jones, the son of V8 Supercars team owner Brad Jones, diced through the race with CAMS Rising Stars teammate Liam Sager to secure the win in a nail-biting finish.

The gap from first to second was the closest margin all year in the Formula Ford category.

Third place went to Sam Power who had started from the front row of the grid but was unable to match the pace of the two Minda Motorsport Mygale SJ11a Fords.

With two laps remaining Jones took first place from Sager who had lead from pole, which he secured early in the day.

Race two of the Formula Ford category sees drivers hit the Townsville street circuit tomorrow at 8.10am before the final race of the weekend at 11.10am local time.