Engineering gamble pays off for Will Davison

Engineering gamble pays off for Will Davison 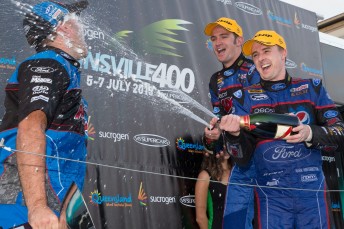 Will Davison was relieved to see a completely re-engineered front-end result in his second win of the year in Race 20 at Townsville.

Davison and his engineer Grant McPherson made extensive changes to the front of the #6 Pepsi Max Falcon in the practice sessions, risking upsetting a car that had shown decent pace throughout recent events.

“It’s pretty complex with these cars at the moment,” said Davison, who won also Race 8 of the Championship at Pukekohe in April.

“They are quite sensitive to any changes. I’ve basically gone down a whole different way with the front set-up and geometry.

“With that you have to change the rear end of the car as well.”

Davison said that the changes were too far down the track to abandon had they shown no improvement.

“You look at a set-up sheet and get a bit scared and think ‘oh I’m going very different to a car that’s fast in Darwin’ but we persevered with it and went past the point of no return at the end of practice yesterday because we’d done all our work with it.

“As I said it was very pleasant to get into the race and see that we had a very good tool.”

Davison, who recorded his 19th career victory, is buoyed by the progress the team has made under difficult circumstances.

“We are on the up. And come the endurance time it’s looking strong. My co-driver Steve Owen did an awesome job in the DVS (winning the opening Dunlop Series race from pole).”

Davison made solid ground in points on Jamie Whincup who clawed his way to seventh place in Race 20.

“But we are focussed on our own job. It’s hard to think about the championship right now. We haven’t been good enough at this stage. but we’ve kept ourselves in a good position.

“We’ve been a little down on ourselves. We have got a lot of people pushing to get some good results. The team are working night and day at the moment and we have just got to keep it going.”