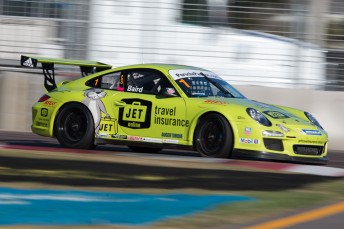 Baird set his time of 1:14.1995 in the opening half of qualifying and then sat his Jet Travel Insurance Porsche in the pits for the second half as others tried to better his mark.

Steve Richards (Laser Racing) and Nick Percat (Coates Hire Racing) chipped away at Baird’s time, but it was not enough as Baird took his first pole of the season.

“It’s great to score my first pole of the year and we only used the one set of tyres, so that is an extra bonus,” said Baird.

“This is a bogy track for me and last year I was locking-up wheels in qualifying and today we only made two fast runs and got the time.”

Percat will share the front row with Richards and Michael Patrizi (Ausdrill – Onsite Racing) on the row behind.

The opening Carrera Cup race will be at 2.25pm.