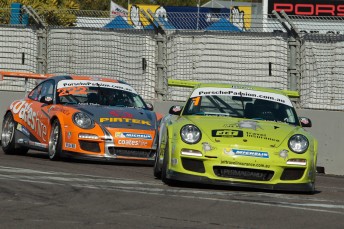 Baird put in another flawless display to lead from flag-to-flag in his Jet Travel Insurance Porsche, leaving Nick Percat (Coates Hire Racing) 1.2s behind after the Bathurst winner started beside Baird on the front-row.

Baird classed it as one of the easiest wins of his career despite Percat remaining a close threat in his mirrors.

“I’ve floundered around in fifth and sixth around here and worked harder than that and then I got out there and the car is spot on. I did adapt my style a little bit before coming here,” Baird told Speedcafe.com “I sort of kept looking in the mirror thinking ‘why are the dropping off’?’

After coming away from the Rennsport round of the Championship with below par efforts by his considerable standards, Baird has extended his points lead in the series.

The race was only four laps old when Renee Gracie’s Fujitsu-backed car ground to a halt at the Coates Hire corner bringing out the safety car.

On the restart Baird kicked clear of Percat, Luff and Patrizi with the order at the time remaining unchanged until the 14th and final lap.

Percat said: ” I was close to Baird on the re-start but didn’t get the run I wanted and as I didn’t quite have the pace today, followed him to the flag.

“We’ll do a bit of fine tuning overnight and hopefully be stronger tomorrow”.

Carrera Cup continues its fourth championship round with the 14-lap Race 2 starting at 10.35am and the final 14-lap heat starting at 1.30pm tomorrow.