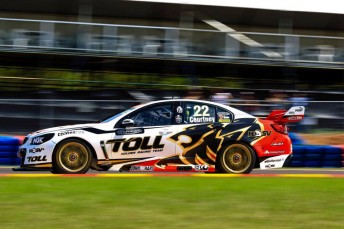 The three-car Walkinshaw Racing stable remains with just one confirmed endurance pilot as the first co-driver practice session kicks off in Townsville today.

The majority of co-drivers will be enjoying a first taste of their endurance mounts during the 30 minute Practice 0 session that proceeds the first full primary driver hit-out of the weekend.

Greg Murphy, however, remains the only confirmed Holden Racing Team co-driver, and has been cross-entered in both Garth Tander’s #2 and James Courtney’s #22 Commodores for the session.

Two international drivers linked to HRT for the enduros, Ryan Briscoe and Oliver Gavin, are believed to have fallen out of the equation in recent weeks, leaving the factory Holden squad scrambling for replacements.

Curiously, the team’s rising star Nick Percat is unavailable having been farmed out to Walkinshaw Racing customer squad Tony D’Alberto Racing in a deal announced in March.

A HRT spokesman declined to comment about the squad’s progress with endurance signings when approached by Speedcafe.com in Townsville.

Ingall, meanwhile, is understood to be particularly anxious about news of his endurance partner following a tough run last year alongside the inexperienced Austrian import Christian Klien.

“The team have told me they have got it under control, but at this stage I don’t know who it is,” Ingall, who was previously thought likely to be teaming with Briscoe, told Speedcafe.com.

“There’s been rumours on who it might be but at this stage nothing is locked in.

“It would want to happen pretty soon because whoever it is would need to start doing some laps in the car.”

Lucas Dumbrell Motorsport also has two endurance seats that are yet to be officially confirmed.

The drives alongside regulars Scott Pye and Dean Fiore are expected to be filled by Paul Morris and Matthew Halliday. The latter is not scheduled to take to the track in Townsville, however, with the Kiwi currently on Spa 24 Hour testing duties in Europe.

The team’s Dunlop Series driver Chris Pither will step aboard David Wall’s Holden for the Practice 0 hit-out, although a team spokesman told Speedcafe.com that a deal with the Kiwi for the enduros is not currently in place.