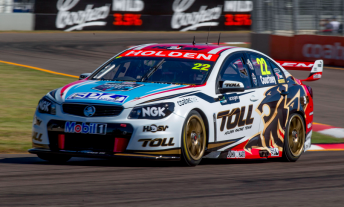 Walkinshaw will fly in suspension parts for its three-car attack

Walkinshaw Racing is tonight awaiting the arrival of new dampers after front-end problems crippled development on the three cars through practice in Townsville.

Walkinshaw Racing is running a completely revised front-end set-up since the races at the Circuit of the Americas in Austin, Texas in May.

Time constraints have prevented the squad from validating and proving parts since its recent switch from Ohlins to Sachs dampers.

Despite the damper issues James Courtney finished with the third quickest time having thrown on new soft tyres in the closing stages of the final practice session.

However Tander finished down in 26th position after losing time during Practice 3 when he damaged the rear of his car on a kerb.

“The problems have affected all the three cars and we’ve changed the front of the car drastically,” Courtney said.

“It’s the first time we’ve come to a track where we are using so much kerb. It’s an issue that held us up today.

“We are flying some parts in overnight to rectify the situation so we can run the correct damper we need to run in the front tomorrow and get a little bit more speed.

“It’s definitely an advantage of running it (the upgraded dampers). We are doing everything we can to make sure we can run it.

“We know what we have to do. It’s just upsetting we didn’t do it before we got here. It’s good that we can fix it so we can run it.

“The problem is we can’t do enough testing to see how the parts fatigue over race distances. “

Courtney and Tander are two of only four drivers who have won the eight races staged at Townsville’s Reid Park circuit since 2009. The others are Jamie Whincup and Mark Winterbottom.