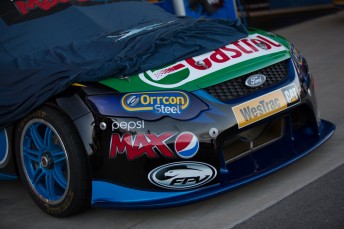 Steven Richards has made a strong start to Ford Performance Racing’s Townsville 400 campaign by topping the co-drivers only Practice 0 session.

The former Bathurst winner, who will share the #5 Ford with Mark Winterbottom in the endurance races for a third successive year, recorded a 1:15.19s lap as the chequered flag waved to edge out Red Bull Racing’s Warren Luff.

Driving the #888 Holden, Luff had sat atop the order for much of the session but could not respond to Richards’ speed on his own final lap.

Nick Percat was third fastest after his first steer of Tony D’Alberto’s Holden.

A total of 20 cars took to the track, with Murphy sampling both the #2 and the #22 Holden Racing Team Commodores, and Paul Morris switching between the #80 and #88 Lucas Dumbrell Motorsport entries.

The session was relatively devoid of incidents, although Dale Wood’s time in the #12 DJR Ford was cut short when smoke began pouring from the car’s left-rear hub.

Several others, including Dumbrell, managed to save spectacular slides through the high-speed Turn 5 and 6 complex during the 30 minutes.

A further three 30 minute V8 Supercars practice sessions will follow this afternoon. Co-drivers and primary drivers outside the top half of the championship standings will take part in Practice 1.

See below for the full Practice 0 result