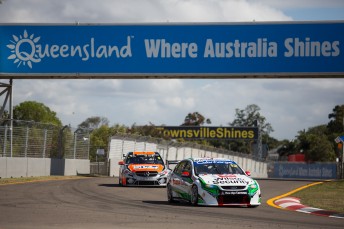 The future of Queensland’s trio of V8 Supercar races remains unresolved with negotiations between the sport and the government continuing.

Extensions to the GC600, Townsville 400 and Ipswich 300, which expire this year, have yet to be given the green light although there appears to be strong support from within government quarters.

News Ltd today reports a package deal has been struck for the three races which its says has collectively been reduced by $2million to $7.3million.

V8 Supercars chief executive James Warburton indicated to Speedcafe.com in Townsville that he will stage another meeting with Queensland Major Events Minister Jann Stuckey next week.

Warburton has had preliminary discussions with the government as his first month in the chair has been dominated by crucial meetings between V8 stakeholders and government departments.

“Discussions are ongoing and we are very confident of a positive outcome. The relationship with Government is strong, there is a lot of support from several key Ministers and we understand what is required from our side.

“There is every chance of a positive outcome but it’s too early to pre-empt any decision.”

Preliminary meetings with the NSW government over the continuation of the Sydney 500 were staged recently with more planned in the near future.

The NSW government have made it clear that it wants to maintain its mandate to be the ‘events state’.

V8 Supercars is also currently in the process of pulling together a draft calendar for 2014 including a date with the Circuit of the Americas to return to Austin, Texas, after this year’s successful event.