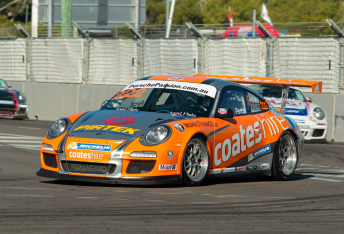 Coates Hire Racing pilot Nick Percat nailed the fastest time of the day in the second practice session for the Porsche Carrera Cup Australia Championship at the Townsville 400 meeting.

The session was cut short with less than 90s to go when Damien Flack ploughed off the circuit, making heavy contact with the tyre wall but escaping unhurt from his Rosche Visper-backed entry. Flack ended up with the 10th fastest time.

In the first session Michael Patrizi guided the Ausdrill-Onsite Racing #29 Cup car to the quickest time in 1:15.6846s.

Baird was third quickest in the Jet Travel Insurance #1 machine.

Luff had less than 10 minutes to prepare for the Practice 0 co-driver V8 Supercars season after finishing fourth quickest in the No Second Chance/Phase 8.

Meanwhile in the Australian V8 Ute Racing Series, 2013 champion Ryal Harris set the fastest time of the day with a 1m28.276s lap.

Sam Power powered to the top of the timesheets in both of the Formula Ford practice sessions.

Power and his Spectrum 014 chassis set his fastest time of 1m18.161s in the second session going 0.11s faster than Macauley Jones, the teenage son of Brad Jones.

Jones had previously set the fastest time in P1 but was excluded from the timesheets with a penalty imposed.