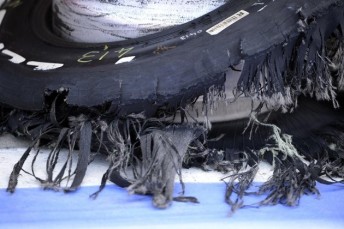 The pressure on Pirelli in Formula 1 has intensified ahead of this weekend’s German Grand Prix, with the Grand Prix Drivers’ Association threatening a walkout from the race if a repeat of last weekend’s blowouts happen at the Nurburgring.

The manufacturer has brought a tyre to Germany with a wall constructed from Kevlar in an effort to alleviate the issues that saw a number of major blowouts during the course of the British Grand Prix five days ago.

The GPDA is not convinced enough has been done to ensure the safety of the drivers, however.

In a statement issued in the day before practice in Germany, the GPDA has vowed it’s members will withdraw should another situation arise like that seen last weekend.

“The drivers of the Grand Prix Drivers’ Association wish to express their deepest concerns about the events that took place at Silverstone,” the Statement said.

“We trust that the changes made to the tyres will have the desired results and that similar problems will not occur during the German GP weekend.

“We are ready to drive our cars to the limit, as we always do, and as it is expected by our teams, sponsors and fans.

“However, the drivers have decided that, if similar problems should manifest themselves during the German GP, we shall immediately withdraw from the event, as this avoidable problem with the tyres endangers again the lives of drivers, marshals and fans.”

The GPDA is Chaired by former driver, Pedro de la Rosa with Jenson Button and Sebastian Vettel sitting on the board with him. Both Mark Webber and Fernando Alonso have been staunch supporters of the GPDA throughout their careers, Webber a former Director between 2003 and 2010.

Webber told the press in Germany he is confident in what Pirelli is delivering, however was cautious about the situation on a whole, claiming it has potential to become an ‘Indy all over again’ – when all but six cars (Bridgestone runners) pulled out of the US Grand Prix in 2005 after safety concerns over the Michelin tyres at the time.

“If we had the problems at Silverstone on Friday (rather than Sunday), then the result probably would have been the same (as Indy ’05),” said Webber

“You can’t just magically turn up with a new type of tyre overnight and supply a hundred set of tyres through the pitlane.

“I’m a bit more confident they’ve (Pirelli) got some more data, although not in the environment they wanted to get it, with which they can be more comfortable in the future.

“We have had some issues in Bahrain and Barcelona (referring to Lewis Hamilton and Paul Di Resta respectively). They are different, but there is enough evidence for them to improve the package that will give us some more confidence.”

All six drivers that presented at the official FIA Formula 1 press conference on Thursday, including Daniel Ricciardo, were unanimous in their verdict in applauding Pirelli for making the construction change on safety grounds.

All were confident that the problem would be under control, however Ricciardo admitted the issue would be at the back of his mind throughout the weekend:

“It’s definitely at the back of your mind,” the West Aussie said. “As we saw at the weekend, the tyres that went, it was all pretty instant, I don’t think any of the drivers felt much before it happened.

“All we can do is drive hard and hang on. I’m sure the changes that they’ve made are going to be for the best, but it’s definitely at the back of our mind whilst we’re in the car.”

Whilst not all drivers are necessarily members of the GPDA, the condemnation of Pirelli has been almost unanimous since the British Grand Prix, with the FIA calling a crisis summit with the tyre manufacturer earlier in the week.

This represents the first time in some time that the GPDA has presented a united front and been as forthright with it’s plans should something of this nature present itself this weekend.

All in all, it makes for a tense weekend in the German paddock.