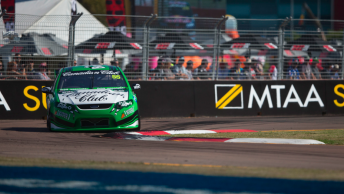 The Bottle-O Ford driver David Reynolds admits he faces a tyre wear challenge after soaring to the fastest time after final practice at Townsville.

With Reynolds going agonisingly close on several occasions to breaking his V8 Supercar winning duck, the Melbourne driver remains guarded despite his early pace at the Reid Park circuit.

“There is a bit of tyre life drama going on with me,” said Reynolds, who scored two of the three pole positions on offer last time out at Hidden Valley.

“Because we’ve set it up so much for a qualifying car, we haven’t gone back to looking after tyres.

“I think Mark’s (Winterbottom) car looks after tyres quite well. We can use a bit of his information and transfer it onto our car and see how we end up.”

Winterbottom is believed to have been the fastest of those that did not run softs today.

Meanwhile, young Kiwi McLaughlin claims to have noted a major improvement in the Fujitsu-backed Commodore following the team’s first test of the season at Winton recently.

“We’ve put stuff in the car we didn’t have time to put in at the start of the year. So we had enough at the Winton test to try a few different things.

“The car is pretty good and I’m really enjoying driving it. I reckon it’s improved 60 percent.”