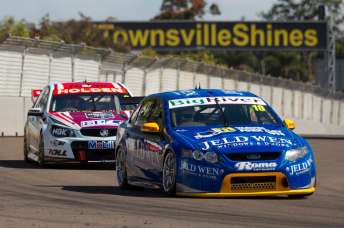 Alex Davison has recorded the fastest time in a second Townsville practice session that featured a mix of tyre compounds and driving talents.

With primary drivers in the bottom 50 percent of the championship invited to join the co-drivers for the second practice hit-out, a total of 24 cars took to the track.

Davison and IRWIN Racing’s Lee Holdsworth recorded fast early times on pre-marked soft compound tyres to sit atop the order for the majority of the 30 minutes.

Tim Slade, another to enjoy healthy pre-marked softs after being involved in the opening lap melee last time out at Hidden Valley, set the third fastest time.

By contrast, Ingall completed just seven laps after being garage bound for much of the 30 minutes undergoing major set-up adjustments.

See below for the full Practice 1 results