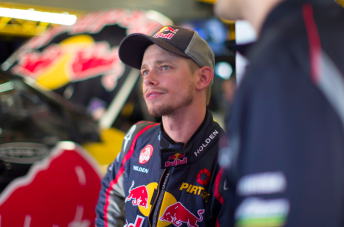 Casey Stoner may scale back his racing commitments next year as the former MotoGP World Champion continues to search for a more relaxed lifestyle.

Having walked away from a seven-year stint at the top of world motorcycle racing at the end of 2012, Stoner had initially planned to take this season out of racing in order to spend more time with his young family.

Although an opportunity to take part in the seven-round Dunlop Series with benchmark V8 Supercars squad Triple Eight and long-time personal sponsor Red Bull subsequently proved too good to pass up, the 27-year-old says that his schedule has been tougher than first thought.

“Unfortunately this year it’s been basically as busy as any other year,” he told Speedcafe.com ahead of this weekend’s third Dunlop Series round of the season in Townsville.

“The idea of it (doing the Dunlop Series) was just perfect to me but it’s been a lot busier than what I wanted it to be.

“I really just need a year off. I’ve been doing this since I was four years old. I’ve been travelling around non-stop and really do just need that time off to get everything done that we’ve always wanted to do.”

When pressed on the possibility of taking a complete racing sabbatical in 2014, Stoner stressed that he is yet to make a firm decision on his plans.

“At this stage nothing is set yet, we don’t really know what we want to do, but next year will definitely be a lot more about me and my family rather than tripping around and travelling everywhere.,” he said

“I’d definitely like to slow down and get to grips with life a little bit.”

Stoner currently sits 23rd in the Dunlop Series standings after a promising yet incident packed opening two rounds at Adelaide and Barbagallo.

VIDEO: Casey Stoner prepares for the weekend in Townsville in a different way