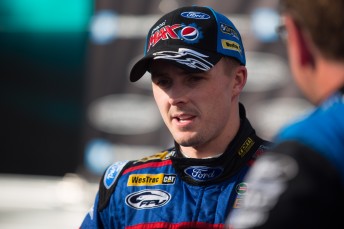 Ford Performance Racing spearhead Mark Winterbottom says the ground rules between team-mates have been clarified following his clash with David Reynolds in Darwin.

Winterbottom turned The Bottle-O Falcon around and out of second place in the Hidden Valley opener, triggering FPR to tidy up what has been a grey area simmering away among its drivers.

Winterbottom said the gloves are off with FPR clearing its drivers to race against each other.

“The team’s approach is now race each other,” he told Speedcafe.com.

“There was always that little bit of ‘he’ll yield, he won’t yield, he should yield, shouldn’t he yield…?”

“There was always these different opinions among us drivers. The ground rules have been laid now.

“If we bump panels when we try to pass each other so-be-it but by the same token if you crash into each other and take each other out you are going to get into trouble.”

The concession is that the FPR drivers must remain within the rules when pressuring each other to pass.

There have been moments of tension within the FPR squad this year, including between Winterbottom and Jeld-Wen driver Alex Davison after a qualifying incident at Pukekohe.

Winterbottom says FPR has made a definitive move to lay down their in-house rules rather than take the middle ground and sit on the fence.

“What we’ve really been told is race within the rules,” he said.

“In the past there was that unknown whether or not someone would let you pass but he (Reynolds) kept shutting the door.

“When you are barrelling into a corner you are having a go and he thinks you are not going to have a go and you think he’s going to move.

“It’s good that the team has made a definite decision because it would have been easy to sit on the fence a bit.

“You never expect a guy to move over but at the same time you don’t want to bump into each other. It’s a fine line however it’s pretty clear now.

“Ultimately you race for a team. You can never step above the team and that was the chat with the drivers and the engineers on Saturday in Darwin.”