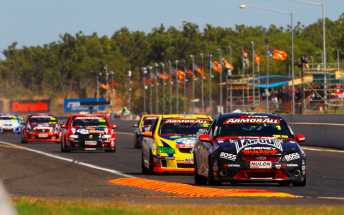 Two-time Bathurst 1000 winner Tony Longhurst will return to the V8 Ute Racing Series field in Townsville this weekend after recovering from a back injury.

Longhurst was forced to sit out the last round at Hidden Valley due to back pain that was later diagnosed as a pinched nerve.

Driving the #25 Walkinshaw Performance entry, which is run by Williams Race Tech, Longhurst has slipped to 18th in the standings as a result.

“I was so disappointed to miss Darwin,” he said ahead of Townsville.

“After showing great results in Perth I was really looking forward to getting back in the car… a podium was definitely in my site.

“(But) I’ve been in the pool every day and chiro every other day to be fit for this round. I feel like brand new.”

Just 30 Utes will take to the Reid Park street circuit this weekend with the entries of Danny Buzadzic and ‘Spud’ Wood both absent due to damage sustained in a multi-vehicle wreck in the final Hidden Valley encounter.