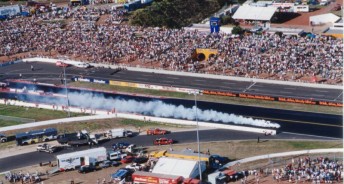 The ANDRA Drag Racing Championships will make another return visit to Calder Park with three professional level categories due to take on Melbourne’s only professional drag racing facility in a one day meet on Saturday, October 19, headlined by Top Fuel.

Scheduled events at Calder in the 2013 calendar had to be postponed  due to a management dispute at the venue. Drag racing will return in October with Top Fuel, Top Bike and Pro Stock Motorcycle as the headline act of the one day event, along with limited Sportsman categories.

“The only similarity between the previous management and the new management is the track, everything else will change,” said Bulley. “ANDRA is bringing in best practice and the best people to ensure drag racing’s return to Melbourne is a success for all the key stakeholders – spectators, the track, ANDRA, racers and sponsors.”

In the release announcing the return to Melbourne, ANDRA didn’t confirm who would be promoting the events but indicated that ANDRA holds a heavy stake in ensuring success of the October event.

The governing body has been granted access to various parts of the facility already to start moving barriers and to improve safety standards, which was one of the key concerns from competitors in the recent events run at Calder Park.

”Racing will be conducted over whichever is the safest distance for competitors, whether that is quarter mile, thousand foot or eighth mile,” he said.

Despite the October 19 date clashing with the MotoGP World Championship event at Phillip Island, Bulley has indicated that the future viability of the straight line sport in Victoria is in the hands of competitors and spectators – and still holds hope of a world class facility to be built in the Southern capital:

“It’s vitally important that drag racing in Melbourne is seen as a going concern, a vibrant and active sport supported by the racers and fans,” he concluded.

“Calder Park is not an indefinite home for drag racing in Melbourne. We must demonstrate through participation and stability that drag racing requires a purpose built world class facility.”

Another professional level event is being planned for December this year, with the 2014 calendar currently being finalised.