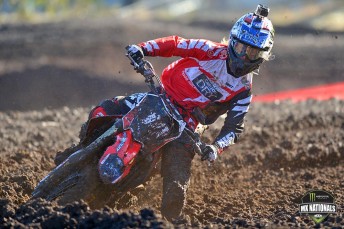 Josh Cacchia is locked into a Honda contract for 2014

The man who currently sits third in the MX2 MX Nationals Australian Championship, 21-year-old Josh Cacchia has firmed up his position at the 2014 starting gates early, inking a deal with his current team, Carlton Dry Honda Racing.

A junior Honda rider, Cacchia has finished on the podium in three of the five Monster Energy MX Nationals events held thus far in 2013 and is incredibly happy to have locked in his plans for next year so early in the season.

“It is a good feeling knowing I have a team that has my back,” said Cacchia. “Both Honda and the team have shown great faith in me, especially as I am carrying an injury.

“I am looking forward to working with Honda and the team in developing the all-new CRF250 but my priorities first and foremost are the 2013 championships.

“(The break between MX Nationals events) has been good for me as I had some time off the bike to let my body heal. I have recently started riding the 450 to gain some strength, and will work on my speed on the 250 over the next couple of weeks.”

The extension to Cacchia’s contract was welcomed by Honda Motorcycles Australia’s Tony Hinton.

“We are really pleased to see a former Honda Junior rider continuing with us,” said Hinton. “There’s no doubt Josh is one of the most talented up and coming riders in the country right now and we look forward to supporting him as he challenges for the championship in both 2013 and 2014.”

Honda’s MX1 pilot, Ford Dale is recovering from a knee reconstruction and is contracted for 2014 also.

The Monster Energy MX Nationals resumes on July 14 at Appin outside Sydney.