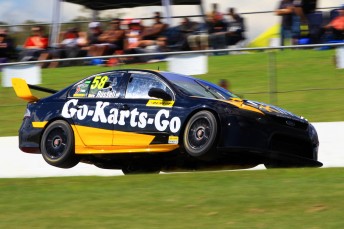 The Novocastrian Motorsport squad will travel to the third round of the Dunlop Series in Townsville this weekend without their data engineer after a major airline refused to re-issue a passenger ticket on compassionate grounds.

Engineer Clint McDonald was forced to withdraw from attending the Townsville meeting after a death in his family last week.

In effort to change the ticket to another name the team said Qantas would charge a new fare and a further $185 in fees which amounted to close to $1200 as it followed company policy.

The team, which fields ex-Dick Johnson Racing and ex-Stone Brothers Racing Fords for brothers Drew Russell and Aaren Russell respectively, will make do without an engineer for the Townsville round.

“The airlines – when they have got so many people flying with them from our industry should be doing a little bit more to help. Particularly in a situation such as this,” team manager Wayne Russell told Speedcafe.com.

“The attitude was, ‘these are the rules’ and they are designed that the airline benefits and we don’t and there is nothing we can do about it.

“Both Drew (Russell) and I talked to Qantas and we both said if we ran our business like this we would go broke. People would never come back. But in our case we don’t have a choice.

“This was a circumstance way beyond our control and they (Qantas) just haven’t helped.

“So the bottom line is we’ve had to cop losing a flight and we are just going without a data engineer. We are not that big a team.”

Drew Russell is ninth in the standings while Aaren is 10th after the opening two rounds at Adelaide and Perth.

“It’s just so disappointing. We just can’t afford another $800 odd dollars to be flying someone else to Townsville,” added Wayne Russell.

Michael Hector had run as a third car under the Novocastrian operation since 2012 and the opening two rounds this season however from Townsville he will now be run out of Matt Stone Racing, alongside the ex-SBR Fords of Ashley Walsh and George Miedecke.