Three from three for Pierce Lehane

Three from three for Pierce Lehane 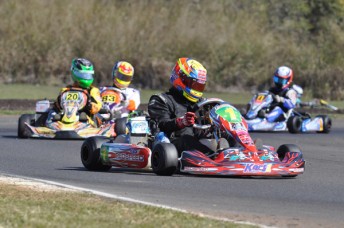 Pierce Lehane was victorious in both Leopard Light and Rotax Light in Bundaberg (Pic: Mid Corner/Gould)

Pierce Lehane secured his third consecutive major event win in as many weekends with victory at the Queensland Karting Championships in Bundaberg on Sunday.

Fresh from victory in the Pro Light (KF) category at the Castrol EDGE CIK Stars of Karting Series two week ago and the Rotax Pro Tour last weekend, Lehane claimed the win in both the Leopard Light and Rotax Light categories in Queensland.

The Australian Motor Sport Foundation-backed driver dominated the weekend’s proceedings to qualifying on pole position in both classes before remaining undefeated across the weekend.

In the Leopard Light class, Lehane emerged unscathed from the opening lap chaos that eliminated the second, third and fourth placed runners. The Redspeed driver was never headed from that point as he crossed the line ahead of Townsville’s Luke Flynn, who charged from position 10 at the start.

Lehane was even more dominant in the Rotax Light category where he put on a clinic for his opposition to secure the victory by more than nine-seconds. Cian Fothergill finished in second place ahead of Brock Plumb. 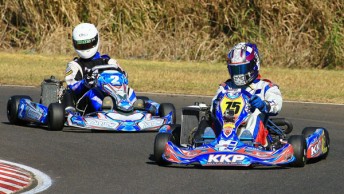 Local driver Kel Treseder also stamped his authority on the event with victory in the Rotax Heavy category. The multiple-time State and National Champion took the win on his home track ahead of Sydney driver Thomas Macdonald and Gold Coast’s Brendan Nelson.

“It’s a bit of a relief more than anything else to get the win. Being the home town boy I felt as though there was a little bit of pressure to perform this weekend, so it feels good to be able live up to those expectations,” said Treseder, who won the Clubman Heavy category when the event was last held in Bundaberg ten years ago.

“Brendan (Nelson) got the jump on me at the start of the final and I knew that I had to get past him in the early laps. Once I got past him, it was all about putting in perfect laps so that he couldn’t close the gap.”

Treseder narrowly missed out on making it two wins in the one day after an intense dual with reigning National Champion Kris Walton in the Leopard Heavy category. The pair battled for the race lead throughout the 21-lap final, while being shadowed by Townsville’s Luke Jones, before Walton clamed a narrow victory.

Joining Treseder in the winners circle at the event was fellow Bundaberg boy Mason Barbera who proved to be superior in the Clubman Super Heavy class to claim his maiden state championship.

Walton also crossed the line first in the Clubman Heavy category, but a loss of lead ballast weight during the race led to him weighing in under the minimum weight and he was therefore excluded from the results. As a result of Walton’s demise, Sunshine Coast racer Shay Mayes added another State Championship to his list of achievements.