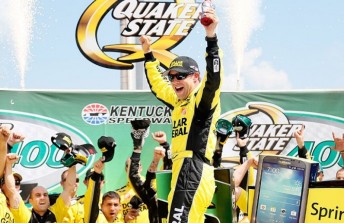 Matt Kenseth has collected his fourth win of the 2013 NASCAR Sprint Cup Series with victory at the postponed Quaker State 400 at Kentucky Speedway.

After rain postponed Saturday night’s race through to midday Sunday, Kenseth saw off all challengers, including Jimmie Johnson who had dominated the race before a spin, to collect his 28th career win.

Kenseth praised his team for the results.

“I don’t even know what to say. Thank you, guys. This is unbelievable. Thank you so much,” he said. “Great job. It was a team effort. You guys make me look so good every week. I couldn’t be any happier and prouder to be a part of this.”

Runner-up Jamie McMurray was closing on Kenseth in the final laps but ran out of time. Clint Bowyer ran third, followed by Joey Logano and Kyle Busch. Johnson, the series leader, rallied to finish ninth.

Denny Hamlin blew a right front tyre for the second time in the race on Lap 147 and rocketed into the outside wall near the exit of Turn 4. The impact recalled the wreck in late March that had caused a compression fracture of Hamlin’s first lumbar vertebra and forced him to the sidelines for four Cup races.

Despite the big impact Hamlin said his back was OK.

“It feels the same as it did this morning. Really, that was the least of the concerns after this hit.”

“The track just threw me right back into him,” Busch radioed in. “It was all my fault.”

Australia’s Marcos Ambrose avoided all the on-track dramas and even took a gamble to take fuel only and at his final stop.

Re-starting 10th, he moved to sixth but was passed by others on fresher tyres and the Tasmanian finished in 13th place.

“We were in position at the end of the race, but some of those other guys had new tyres and just got us,” said Ambrose.

“This finish is a lot better result than what we’ve had at the mile-and-a-half tracks in a little while. It’s not a win, a top-five or top-10, but we were close for any of those results.

“We were in position today and we’ll keep working to get good results.”