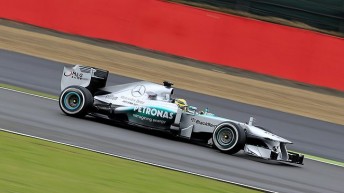 Nico Rosberg prevailed over a barnstorming Mark Webber as tyre failures signalled another crisis for Pirelli at the British Grand Prix.

Mercedes driver Rosberg staved off a grandstand finish to beat Webber (Red Bull) who staged a remarkable recovery after damaging his front wing and slipping to 15th on the opening lap.

Fernando Alonso, too, staged a rearguard fightback to claim the final podium finish as Vettel’s race expired on lap 41 with his Red Bull limping to a halt in the pit straight with suspected gearbox failure.

Lewis Hamilton was fourth after staging a decent recovery from leading early before he dropped to near the rear. Kimi Raikkonen finished fifth in the Lotus ahead of an improving Felipe Massa.

Hamilton was the first to fall victim to a tyre failure when his left rear exploded down the Wellington straight.

Massa, who had an extraordinary start from his lowly grid post, was next with his left rear failing while Jean-Eric Vergne’s Toro Rosso did the same on the left rear corner approaching Stowe.

Vergne’s tyre failure brought out the safety car on just lap 16 of the 52-lap GP with Pirelli forced to strongly recommend to teams to increase the tyre pressures by 2 psi.

More alarm bells rang when Red Bull then reported that cuts appeared to the left rears of Vettel after his initial pit stop.

The crisis over the left rear failures seemed to quell however with six laps remaining Sergio Perez’s left rear shredded.

It set up a barnstorming final six laps with Webber launching a concerted raid firstly pouncing on Alonso in a ballsy move down the inside at the end of the Hangar straight before ultimately moving into second and beginning a final fling at the lead.

“I didn’t have a clue what happened after the line. That was frustrating. The front wing was taken by Grosjean which compromised our first stint,” Webber said, who drove his final British GP after announcing last week he would join Porsche’s LMP1 sportscar effort next year.

“I would have liked a few more laps at Nico but he deserved the win.”

The  600th GP celebrations for Williams sadly ended in no joy with its drivers Pastor Maldonado and Valtteri Bottas finishing 11th and 12th.