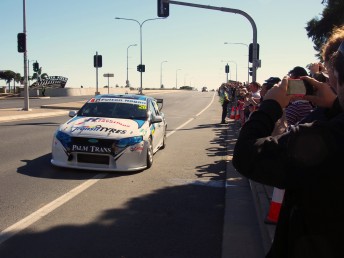 The teenager has stepped up to the Dunlop Series this year after a season in the Kumho V8 Touring Car Series, currently sitting 21st in points ahead of Round 3 in Townsville.

Although the streets were closed for Haber’s demo, the Ford Performance Racing-built Falcon stuck to the speed limit as part of a Mackay Police-endorsed road safety message.

“It was promoted as a family day and I was happy to show all the kids that you can be responsible on the street and that racing belongs at the track,” said Haber.

The sister MW Motorsports Fords, campaigned in the Dunlop Series by Steve Owen and Dale Wood, were also on display as part of the promotion.

Haber grew up karting in Mackay, although moved to Brisbane to study engineering in 2011 – a year in which he competed in the Swift Racing Series.