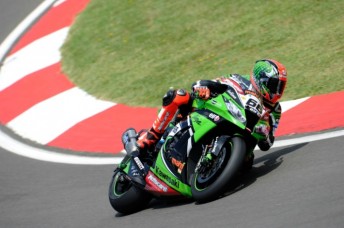 The 27-year-old Brit took full advantage of title rival Sylvain Guintoli’s retirement by securing his fourth win of the season to close the gap in the standings to just three points.

Sykes, who had dominated every session in the lead up to the race, did have to fend off the early advances of David Giugliano, who came home in second ahead of Aprilia’s Eugene Laverty.

Jonathan Rea managed to get the jump at the start and he and Giugliano breezed by polesitter Sykes on the entry to Tamburello for the first time.

But the Ulsterman ran wide at the Villeneuve chicane handing the lead to Sykes while he plummeted outside the top 10.

This gave Giugliano the lead which he held onto for six laps before succumbing to a slick move from Sykes. The Italian managed to match the Kawasaki’s pace and the pair gapped the chasing pack. However, Giugliano’s charge for the victory was broken by a lap record from Sykes.

Guintoli had been holding on to third spot but his race soon came to an end when his Aprilia slowed and he pulled off the circuit to retire.

Further back a hard charging Rea was making up for his earlier error as he dispensed of Leon Camier and Chaz Davies to move into fifth behind Marco Melandri and Laverty.

The battle for third began to heat up in the closing stages with Rea closing in on Laverty and Melandri. The Ulsterman’s pace was rapid and he wasted little time in slipping past Melandri but drama struck shortly after as he lost control a couple of laps later at the Rivazza.

In the end, nobody could stop Sykes from taking his fourth win of the season ahead of Giugliano, who recorded his best World Superbike result in second. The battle for third was won by Laverty who held off Melandri at the flag.