Freddy Loix has a healthy lead at Ypres

Local legend Freddy Loix is on course to scoring an eighth victory on the European Rally Championship Ypres Rally in Belgium following a dominant performance, while a fastest time on the final stage of the day helped Kiwi flyer Hayden Paddon move into third overall.

Back in aboard a Škoda Fabia Super 2000 for the first time in more than a year, Loix was fastest through leg one’s opening five stages, which took place in increasingly treacherous conditions.

Despite being outpaced by Hayden Paddon on the day’s final run, Loix’s lead at the overnight halt in Ypres stands at 1m36.2s from Bryan Bouffier (Peugeot 207 S2000) with the Ford of Paddon a further 33 seconds back in third. 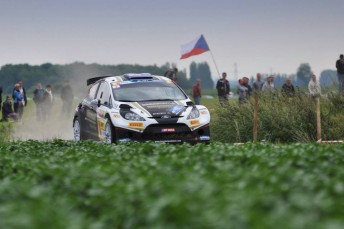 “We could go quickly from the first stage because I had a good feeling with the car and we saw no reason why we should not push. Tomorrow is still a long day and now we have to control the race, which won’t be easy if the conditions are as difficult as they have been today.”

Paddon struggled for grip and confidence – losing 20s on the first corner of the first stage when he skated into a potato field – before fighting back in the afternoon.

“I have struggled a lot with grip and have not been able to build any confidence.

“Third overall isn’t too bad at the moment and winning the last stage was a bonus. Dryer conditions expected tomorrow and we hope to push.”

Craig Breen was firmly in contention before a puncture on stage four and a broken front-left driveshaft left his Peugeot in rear-wheel drive only and fell back to fourth outright.

Australia’s Molly Taylor had a tough day, first with a puncture on the fourth stage and then her event ended in a ditch on the following test. She will now switch her attention to the next event in Romania at the end of July.

Saturday’s itinerary features 14 stages over a competitive distance of 196.07 kilometres.