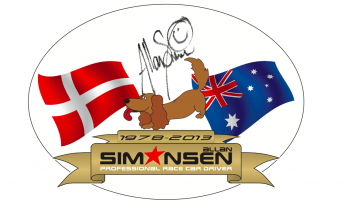 Simonsen, tragically killed in the opening 10 minutes of the Le Mans 24 Hour last weekend at the wheel of an Aston Martin, had a special affinity with Australian racing.

He competed in the V8 Ute Series in 2005, won the Australian GT Championship in 2007 and finished on the Bathurst 1000 podium in a Commodore he shared with Greg Murphy two years ago.

The Dane was a regular co-driver for the V8 Supercars endurance races and was to have shared the Brad Jones Racing Wilson Security Commodore with David Wall at this year’s enduros.

His South Australian media connection and good friend Jon Hart designed the tribute that includes his personal logo, with a sausage dog flanked by an Australian and Danish flag. 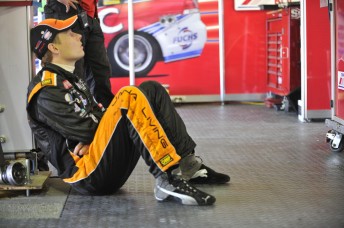 “My sausage dog was Allan’s southern hemisphere dog. He absolutely loved it. We feel that the design is a fitting and appropriate tribute for a champion bloke and a champion driver,” Hart told Speedcafe.com

Hart is travelling to Denmark today to attend the 34-year-old Simonsen’s funeral.

It is understood that a special tribute is also being organising for the next round of the Australian GT Championship at Sydney Motorsport Park from July 12-14.

V8 Supercars have not yet indicated whether it had planned any separate tribute but acknowledged that the Dane was a key member of the category’s long distance race network.

Simonsen had twice stepped onto the podium in the GT2 class at Le Mans as well as podium finishes in the Nurburgring and Spa 24 Hour races.

He was responsible for some of the quickest laps around the current Mount Panorama layout clocked in the 2:04s and 2:05s.

Brad Jones Racing earlier this week announced that it would be organising a similar tribute to what it has previously instigated for the squad’s late racer Jason Richards for the long distance races.