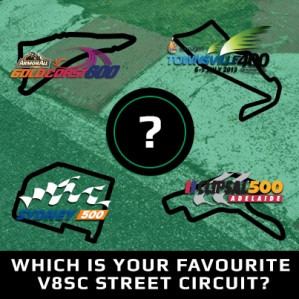 Results generated from the survey, that included 169 questions and statements attracted more than 6000 participants, served up some incisive trends in fan culture.

Among the questions from the survey which ran from March 13 to midnight May 29 was – which is your favourite street circuit, whether attending or watching on TV?

The Clipsal 500 generated by far the bulk of the response at 61.2 per cent with the Gold Coast next at 22.4 per cent while Sydney garnered 8.3 per cent, just nudging out the Townsville race at 8.0 per cent.

The result follows a recent report from Economic Research Consultants which found this year’s Clipsal 500 to have enjoyed an increase in direct economic benefit to South Australia and a growth in the number of interstate visitors.

When posed with the question of: If you could choose a city for a future street circuit which would it be?, Speedcafe.com survey respondents where evenly divided between three locations.

Perth came up on top at 14.8 per cent ahead of Newcastle and Canberra, venue for the ill-fated National Capital race in the early 2000’s, which shared 14.5 per cent of the vote. 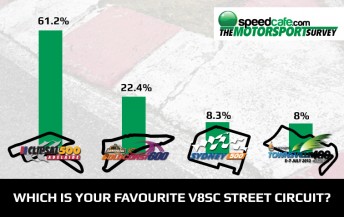 However the option of ‘none of the above’  topped the question at 34.5 per cent.

The vast majority of participants to the survey considered a need for a new world class facility in Australia similar to Abu Dhabi’s Yas Marina colossus or the Circuit of the Americas track in Austin, Texas.

Almost 42 per cent strongly agreed there was a need to build a 21st motor racing complex while 30.5 per cent agreed with 16.6 per cent remaining neutral on the subject.

Under 2 per cent strongly disagreed while 9.5 per cent disagreed.

The Phillip Island Grand Prix circuit attracted the majority of votes cast on the question of: What is the best permanent facility in Australia?

Just over 56 per cent opted for the picturesque Victorian circuit while 24.6 per cent chose Sydney Motorsport Park, formerly known as Eastern Creek.

Sandown was the next pick at 8.7 per cent while Darwin’s Hidden Valley attracted 4.1 per cent with Queensland Raceway at 2.5 per cent, Winton (1.7 per cent), Barbagallo (1.4 per cent) and Symmons Plains (0.7 per cent).

There was a fine balance to the statement: Bathurst should host another round of the V8 Supercars Championship but in a different format.

Fans responded favourably to the statement of: Events outside Australia and New Zealand are good for the sport.