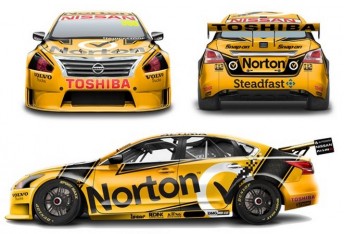 Nissan Motorsport’s two Norton-backed Altimas will sport a revised livery for the remainder of the 2013 season, promoting the team’s adopted ‘hornet’ mascot.

The first running of the livery in Townsville will coincide with a one-off rebranding of the yellow side of the four-car garage from Norton 360 Racing to Norton Hornets Race Team.

The team took on the ‘hornet’ tag after running a social media competition to give the squad an edgy character earlier in the year.

The revised livery includes a menacing set of hornet-eye headlight covers and a subtle depiction of a swarm of hornets on the rear quarter panels.

The 2013 season is Norton’s second as a primary backer in the V8 Supercars Championship having followed James Moffat to the Nissan outfit from Dick Johnson Racing.