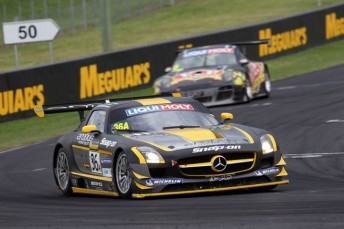 The winning Erebus Mercedes from 2013

This year’s Bathurst 12 Hour combatants Erebus Motorsport and Clearwater Racing are both among the early entrants for the 2014 edition of the endurance classic.

Entries for next February’s event officially opened on June 1, with race organisers reporting that 24 cars are already on the list.

The move coincides with the team’s scaling down of its Australian GT Championship effort from two cars to one as it continues to discuss taking the program to international races such as the Sepang 12 Hour and Macau Grand Prix support event.

“As a team we have been investigating our expansion internationally this year and we are no longer an unknown team from Australia: We have creditability from within the ‘GT family’ around the world. “Outside of the efforts setting up our V8 Supercar program, winning the 2013 race was the biggest thing that has happened to us as a team. We committed hard to it and it payed off.”

Despite only nominating one car at this stage, Ryan is hopeful of bringing both of its cars to achieve a quinella – a result it missed this year after a late-race mistake from Holdsworth sent the #63 entry to the garage.

“Perhaps the biggest disappointment of this year was the fact we didn’t finish one-two,” reflected Ryan.

“We were looking like achieving that very late into the race, but it shows how quickly things can change in endurance racing.

“We would like the opportunity to come back and change that next year, if possible.”

The Singapore-based Clearwater Ferrari meanwhile had been arguably the fastest car in this year’s race, finishing second with its driving line-up of Craig Baird, Matt Griffin and car owner Mok Weng Sun.

The result proved one better than the squad’s 2012 effort and came despite being handed three drive-through penalties and a mechanical black flag during a fraught day.

Fellow international Ferrari squad AF Corse is also said to be amongst the initial entries, leaving organisers hopeful of a high quality 55 car grid for the February 9 encounter.