With Mark Webber announcing he will leave Formula 1 at the completion of the 2013 season to head up Porsche’s sportscar program, Speedcafe.com looks back at 10 of the greatest moments in the Australian’s Formula 1 career to date.

The grit and determination shown by the Queanbeyan native to make it to the top would repeatedly come to the fore once he had reached Formula 1 – reigniting Australia’s passion for the sport in the process.

Starting with a bang 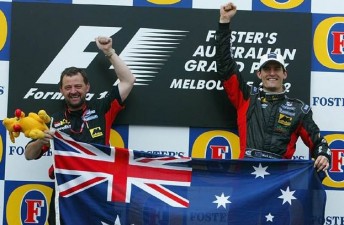 Webber had a dream F1 career start in an unfancied Minardi

Mark Webber enjoyed the rare distinction of having his first Grand Prix in his homeland. The then 25-year-old certainly made the most of it, scoring points with fifth place in a highly unfancied Minardi.

A large portion of the field may have been taken out in a first corner pile-up, but Webber had to fight for his two points regardless – fending off a charging Mika Salo Toyota with his ailing Minardi-Asiatech.

Having grafted his way through the junior formula in England before surviving a stint in sportscars and a bold return to Formula 3000, Webber had finally arrived in Formula 1. Taking the flag 11th out of 12 finishers after qualifying 19th may not sound like much, but Mark Webber’s performance on his first appearance at Monaco as a Grand Prix driver had the right people talking.

The Australian’s qualifying effort was not only two seconds faster than that of team-mate Alex Yoong, but it was also enough to best the big-budget Jaguars of Pedro de la Rosa and Eddie Irvine.

Passing de la Rosa on track in the race was the Sunday afternoon highlight at a venue that would provide plenty more memorable moments in the years to come. Moving to Jaguar for the 2003 season marked a step forward in the career of Mark Webber, but just how far forward remained unclear pre-season.

A 14th on the grid in Melbourne proved an instant career best, but that would be smashed by a full 11 place just two races later in Brazil, where he lined up 14 slots ahead of his previously highly rated team-mate Antonio Pizzonia.

Although the weather-hit race itself ended with a big accident for Webber, this is where the lad from Queanbeyan had his first look at the front of the F1 field. 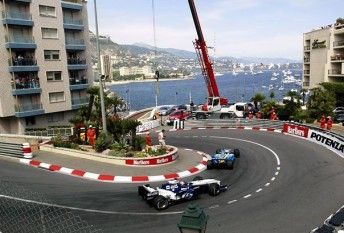 First podium at ‘that’ place

As the scene of his first Grand Prix podium finish, the 2005 Monaco Grand Prix should feature in any highlights package of Mark Webber’s career.

The now Williams mounted Australia continued the outstanding form on the streets of the principality that he’d shown earlier in his career – starting and finishing third.

It was somewhat of a bittersweet result however, as circumstances allowed team-mate Nick Heidfeld to jump him in the pits and eventually take second behind dominant winner Kimi Raikkonen. 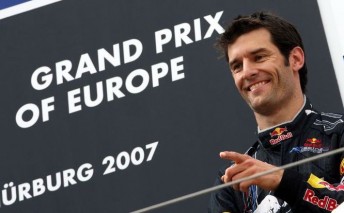 A full 40 races after his first podium, Mark Webber finished in the top three again at the 2007 European Grand Prix, this time driving a Red Bull.

In a season plagued by unreliability, the Nurburgring race saw Webber hand Red Bull Racing – which had been borne out of the Jaguar operation – just the second podium of its three-season life.

The race itself had been hit by rain late in the going, with Webber only just holding out his replacement at Williams, Alexander Wurz, by 0.3s. Finally! Webber achieves his first win at the Nurburgring

The 2007 visit to Nurburgring proved Webber’s only podium in his first two seasons with Red Bull, but much had changed by the time the F1 circus returned to the famed venue in 2009.

Widespread regulation changes and a bit of Adrian Newey magic helped Webber to four podiums in the first eight races, and when runaway points leader Jenson Button qualified back in the pack at Round 9 in Germany, Webber was there to pounce.

Not even a clash with Rubens Barichello off the start and a subsequent drive-through penalty could stop Webber on this day – with a breakthrough victory the result. 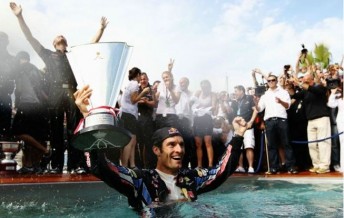 A recurring location in the story of Mark Webber’s magic moments, the 2010 edition of the Monte Carlo classic may well prove to be the greatest in the Australian’s career.

Making the most of a brilliant Saturday pole position, Webber held his nerve in what turned out to be a series of sprints between Safety Cars on Sunday.

The now seasoned campaigner eventually led team-mate Sebastian Vettel to the line under Safety Car conditions, drawing level with the German at the top of the points standings in the process. 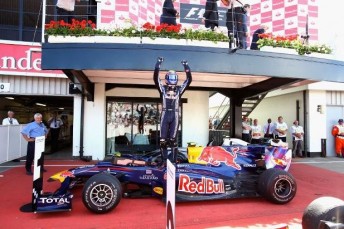 If there was a race outside of his home Grand Prix in Australia and the crown jewel of the calendar, Monaco, that Mark Webber wanted to win, it was undoubtedly the British Grand Prix.

Not only is the English event steeped in Formula 1 history, but the Silverstone venue provided the scene for much of the locally based Webber’s junior career.

The 2010 Silverstone win also proved a great spark for his title assault which had been dealt a heavy blow in the previous race when the Red Bull driver spectacularly back-flipped his way over Heikki Kovalainen’s Lotus. 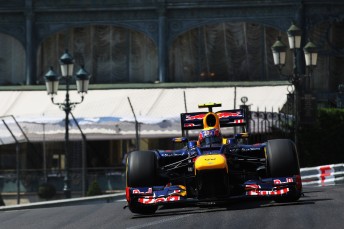 For the second time in three years Mark Webber was the king of Monte Carlo, and again his victory came under immense pressure.

This time though, it was not a series of flat out sprints but rather a measured drive that required Webber to manage the typically high Pirelli tyre degradation and late sprinkles of rain.

As it had done so two years earlier, victory in Monaco served to bring Webber level with team-mate Vettel in the points standings after a consistent if not spectacular first phase of the season. 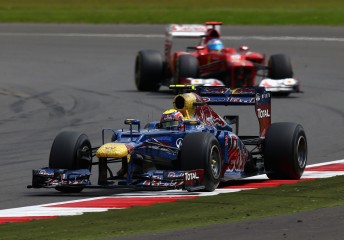 At the height of speculation that he was being head-hunted by Ferrari for the following season, Mark Webber put the Scuderia and its golden boy Fernando Alonso in their place at the British Grand Prix.

Judging the tyre conundrum to perfection, Webber was able to close on Alonso dramatically in the dying stages – eventually snatching the lead with just two laps to go.

Confirmation that Webber would remain at Red Bull Racing for another season came just days later.