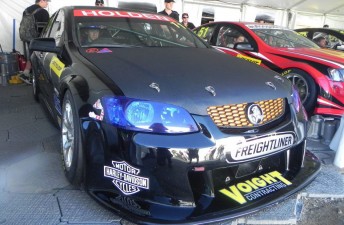 The 22-year-old is set to contest the event with Sydney Star Racing, driving the ex-Kelly Racing Holden that Aaron Tebb campaigned at Adelaide and Barbagallo.

The deal is a one-off at this stage, although Garioch is hopeful of making further Dunlop Series appearances later in the year, either with Sydney Star or in one of the ex-Kelly cars set to be run by fellow Kumho V8 team THR Developments.

Garioch is familiar with the Sydney Star outfit after the squad took over the running of his Kumho Series Ford during the second half of last year.

The combination won the opening round of the 2013 season at Eastern Creek in March before being forced to the sidelines due to a lack of funds.

“We just wanted to test the waters for next year, for us it’s all about trying to get a start for 2013,” Garioch told Speedcafe.com of entering the Dunlop Series.

“It’s a shame I couldn’t go on and do the rest of the Kumho Series because we’d just got the car up to top spec for that category, but we just didn’t have the funds to pursue it.

“We’ll see how we go in Townsville and hopefully we can give the Development Series a full crack next year.”

Garicoh, who spent two years in Saloon Cars before moving to the Kumho Series in 2010, had his first taste of the Holden he will race in Townsville at a recent Wakefield Park test hit-out.

“Aaron and I were jumping in and out of the car and he’s about 7 and a half feet tall, and I’m 5’8, so I could barely see over the steering wheel!,” he said of the test.

“But it was a pretty good day, all in all. It took me a while to get used to the sequential box and the extra 500 revs make a lot of difference as well.

“Overall the car felt good. I had a bit of drama locking fronts, but we made some adjustments and hopefully we’ll be right for Townsville.”

The only unknown is the fate of Jack Perkins, who is still hopeful of raising the funds to make a second appearance with Eggleston Motorsport after a promising first hit-out with the team at Barbagallo.

“It’d be really good to finish the year off but it’s just tough commercially and we’re trying really hard to make it all work,” Perkins told Speedcafe.com of making Townsville.

“We’ve got some upgrades for the cars for Townsville which makes me even more eager to get there because the tools we had in Perth weren’t quite right.

“We’re doing everything we can to get there and put in a more competitive showing.”

Several front-running teams have tested ahead of the Townsville event, which will see a mixed tyre format for the first time in the second-tier series.