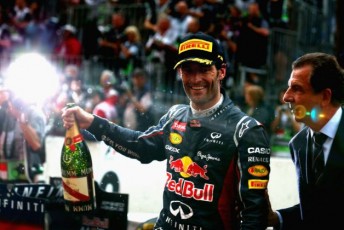 Webber announced on Thursday that he will leave Formula 1 at the conclusion of the season to join Porsche’s new-for-2014 World Endurance Championship effort.

Webber’s Grand Prix career to date has netted nine wins, including victories in the championship’s crown-jewel Monaco race in 2010 and 2012.

Although netting all of his successes, the last five seasons at Red Bull have seen repeated on and off-track clashes with team-mate Sebastian Vettel, as well as at-times public politicking with Red Bull’s motorsport advisor Helmut Marko.

“I often say to people that when you’ve got large amounts of money involved, different nationalities and egos you can’t jump over there’s always going to be some agro.

“At the end of the day he’s had a terrific run in Formula 1 and achieved what a lot of others haven’t been able to do in having a long career at the top level.

“He’s earned good money, won plenty of Grand Prixs and now he’s got to move on to wherever he feels happiest.”

Despite the strained environment at Red Bull, Jones added that the team’s ability to produce competitive cars in recent seasons ensured it was still the right place for his fellow Australian to be.

“What’s a better environment than a team that’s won the last three world championships?” he said.

“There are plenty of drivers that would be giving their left nut to be in that car.”

Noting that mirroring his own comeback to Formula 1 post-retirement is highly unlikely for Webber, Jones added his thoughts on whether Webber jumped from Red Bull or was pushed.

“In all honestly I think things were deteriorating in that team to such a degree that it was very unlikely he would have been there next year,” he said.

“The question then would be where would he go (to stay in Formula 1)? There are a couple of possibilities (with other teams)… but he’s really got to do what makes him happy and if he wants to continue living in Europe, make reasonable money and keep his bum in a competitive car, then it (Porsche) is a good option.”

Jones, who remains one of only two Australians to win the World Drivers’ Championship along with three-time title holder Jack Brabham, is hopeful that Webber’s exit will not hurt Formula 1’s popularity in Australia.

“With a bit of luck there will still be an Australian element in Formula 1 that we can follow,” he said, referring to current Toro Rosso driver Daniel Ricciardo, who hails from West Australia.

“I’ve said it all along over several years that I believe Daniel has the talent to make it into a competitive team.

“I think he has got what it takes, but he’ll want to lift his game a fraction because Jean-Eric Vergne seems to have the wood on him at the moment. It was the other way initially but Vergne has certainly stepped up.”

Twelve races still remain in the 2013 Formula 1 season, with Webber currently sitting fifth in points, some 63 adrift of team-mate Vettel.

“Now he can tell them all to go and get stuffed without the recriminations of being sacked,” laughed Jones of Webber’s remaining races.