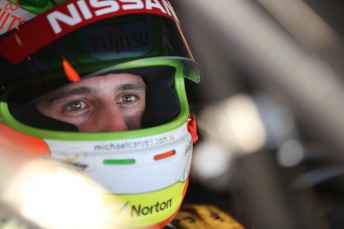 Nissan Motorsport co-owner Todd Kelly says that his factory outfit is keen to renew the contracts of its new-for-2013 drivers Michael Caruso and James Moffat for next season.

Both Caruso and Moffat are on one-year terms with the Norton 360 backed division of the four-car Nissan squad.

The pair have both performed solidly through a huge development process following Nissan’s plunge into the championship.

Kelly confirmed discussions have taken place but nothing has been firmed up beyond the end of this year.

Despite what appears to be an open ‘silly season’ ahead with many top drivers off-contract, the owner-driver says that he would like to have his existing drivers locked in sooner rather than later. 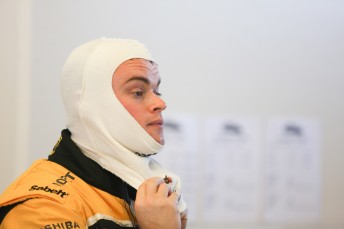 “We are very happy with them. They are competitive and good guys. The biggest thing is making sure we’ve got the sponsorship and funding to wrap around them,” Kelly told Speedcafe.com

“There’s a lot of things to fall into place but from our point of view we are certainly happy with them at the moment.

“We’d like to get it finalised as quick as we can but there’s nothing which has been locked in.”

Moffat, who brought his long-time backer Norton to Nissan Motorsport from Dick Johnson Racing in the 2012/13 off-season, was caught up in the melee in Race 19 at Darwin with his #360 Altima suffering considerable damage.

“The weekend was not great for us,” he said of Darwin.

“(But) we’ve had some fair results and some top 10s up until this point.

“It (contract) is in the process of being negotiated. We’ve had a fair start to the year.

“It would be a shame not to continue with the work that we’ve started doing.”

Moffat and Caruso sit 14th and 20th respectively heading into next month’s Townsville 400.

Rick Kelly is the highest place Altima driver in 13th, while Todd is mired down in 26th.