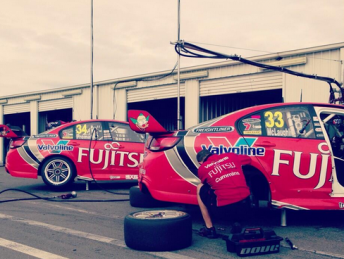 It is believed the strengthened and significantly reworked transmission was fitted to the #34 Commodore of Frenchman Alexandre Premat.

Originally it was planned to test the revised unit during practice at Darwin almost two weeks ago however time constraints prevented it from going ahead.

Albins is seeking to validate changes by clocking up significant mileage on donor cars during authorised V8 Supercar testing.

Just a week after it was officially announced that Garry Rogers Motorsport will become the Volvo Polestar Racing operation with a pair of S60 sedans next year, it completed its first in-season test session at Winton.

Importantly GRM has not given up on development work on its Commodores after not having had the opportunity to test since the pre-season hit-out at Sydney Motorsport Park in February.

GRM showed genuine competitiveness more than once earlier this season which was confirmed by Scott McLaughlin’s landmark maiden main game win at Pukekohe in April.

The team has now armed itself with development and fresh set-up work in time for the next round at Townsville’s Reid Park circuit starting on Friday week.

Rain had hindered plans for several hours at Winton however the 20-year-old McLaughlin reported decent progress through the day.

“We were messed around a bit for three or four hours and we couldn’t do the work we wanted. We ran and did a bit of wet testing but there’s only so much you can do,” McLaughlin told Speedcafe.com

“(But) in the end we had a very productive test day. It’s always good to leave a test when the car feels good. It’s probably the best it’s ever been.

“We did the upgrades that we needed to but there’s only so much you can do with the rain.

“We had about two hours of running the upgrades and some set-up changes and it ended up pretty positive.

“Alex was going in a completely different direction to me. We will have a pretty good package when it all comes together. “

The Kiwi McLaughlin claimed that GRM had struggled to maintain its promise earlier in the season.

“We sort of plateaued a bit there and we needed this test to get some stuff done. There’s only so much stuff you can do at a race meeting,” he said.

“I like Townsville and these cars are good on street circuits.”