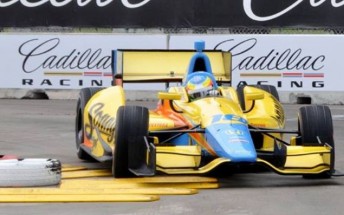 James Davison is set to return to the wheel of an IndyCar as he continues to pursue his dream of racing full-time in the American open-wheel series.

The 26-year-old, who is the cousin of V8 Supercars drivers Will and Alex Davison, is scheduled to test for Dale Coyne Racing at Mid-Ohio on Tuesday.

Coyne fields two Dallara-Hondas in the series, with Ana Beatriz, Pippa Mann and Mike Conway having all raced the #18 entry that Davison will test during the season’s opening 10 races.

Davison has significant experience at the Mid-Ohio course, winning twice there during his Indy Lights career.

“I’m grateful to Dale for this opportunity and have a fantastic team-mate in Justin Wilson to work with,” said Davison of the test.

“I’ve never given up on my IndyCar dream and fully intend to make the most of this opportunity.”

He has made limited appearances in categories including the Grand-Am Sportscar Series and Carrera Cup Australia since finishing second in the 2009 Indy Lights season, his last full-time ride.

In other IndyCar news, Davison’s countryman Ryan Briscoe will return to Panther Racing for the upcoming Pocono event.

The former Sydneysider has shared the #4 National Guard Dallara-Chevrolet with Oriol Servia since JR Hildebrand was dumped by the team following a crash in the Indianapolis 500.