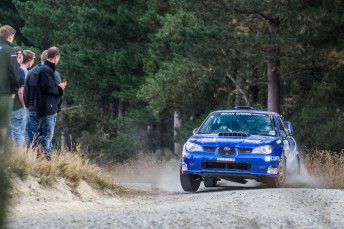 Matt van Tuinen and Erin Kelly during the opening round of the NZ Rally Championship in Otago in April. Pic: Neil Gardner

Queensland rally driver Matt van Tuinen has been ruled out of his home event and Rally Australia in September after suffering a serious back injury at the recent New Caledonia rally.

Scans revealed that van Tuinen suffered a serious fracture of a vertebra which required immediate surgery.

He and co-driver Erin Kelly set the third fastest time on the opening stage of the second round of the Asia Pacific Rally Championship.

On the next test the VTRacing Subaru Impreza landed heavily after a jump, leaving van Tuinen with excruciating back pain.

“Instantly I had massive pain in my spine,” van Tuinen said.

“I tried to continue but it was not possible and we had to stop after about a kilometre and call for medical help.

“Obviously, that put us out for the rest of the event,” he added. “The car was damaged but driveable and Erin was okay.”

The serious nature of the injury means van Tuinen faces a lengthy period of rehabilitation.

“I’m devastated to end my rally season this way,” he said. “We were looking forward to competing in our home event at Rally Queensland and also at the WRC event at Rally Australia, but unfortunately we have to miss both events.”

van Tuinen and Kelly finished fourth in the opening APRC round, the Rally of Whangarei in New Zealand last month behind the Skoda Fabia S2000 of Finn Esapekka Lappi and Janne Ferm.

Rally Queensland in the forests north-west of the Sunshine Coast serves as the third round of the APRC from July 13-14.