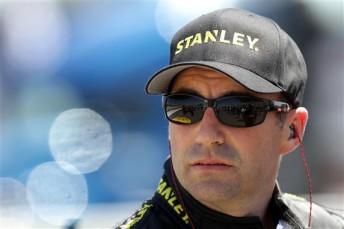 Marcos Ambrose has again come away empty handed at what has become his bogey track at Sonoma, California.

A victory at the road course circuit remained elusive for Ambrose who continues to battle what has been his most difficult season in the Sprint Cup series.

His seventh-place finish in the 16th race of the season leaves him languishing in 22nd position in the points standings.

It has been particularly difficult for the Tasmanian who sees his Richard Petty Motorsports team-mate Aric Almirola in 16th position. Almirola has consistently outperformed the Aussie in the 16 races so far in 2013 after battling his share of technical and racing issues.

Ambrose embarked on his NASCAR journey after immediately falling just short of winning a third consecutive V8 Supercars Championship when he finished second to his then Stone Brothers team-mate Russell Ingall in 2005.

In 2006 Ambrose took the first steps in his stock car career in the NASCAR Truck Series, running in 22 of the 25 races and leading 77 laps.

It was a decent year for Ambrose who completed the 35 races with one pole, one top five and six top 10 finishes.

Ambrose competed part-time in the Sprint Cup doing 11 of the 36 races in 2008 but has done the full season in each year since.

Since 2011 Ambrose has driven for Richard Petty Motorsports with his two Sprint Cup victories coming at Watkins Glen in 2011 and 2012. He has 35 top 10 finishes and two pole positions during his time in the Sprint Cup.

There remains one significant missing link in the NASCAR program for Ambrose.

The 36-year-old is yet to crack a win on an oval track.

In this week’s poll Speedcafe asks how you rate Ambrose’s NASCAR career so far?