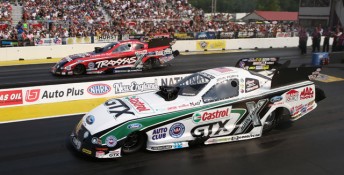 The first time that the NHRA had brought a full Mello Yello Series event to New England resulted in a huge crowd turning out for the event, in the north east of the USA.

The elder Force has shown some resurgence over recent rounds – winning last weekend and now setting top qualification position and taking the runner up position in the Castrol GTX High Mileage machine.

There were no holds barred between the pair when it got to the final:

“I definitely told him I was going to get some revenge (from last week), and we were able to do it. It was a lot of fun,” Courtney Force said. “We got down there, and our car got in a little bit of trouble, but I had my foot on the throttle hoping he wouldn’t catch up. After the win, he came over and hugged me and congratulated me. We were both really excited, and it was great for our team.”

To advance to the final, the younger Force got past fellow female competitor, Alexis DeJoria, Tim Wilkerson and Jack Beckman, whilst John got by Dave Richards, Jeff Arend and Ron Capps – who joined his team-mate Beckman in the semis.

Courtney moves to fourth in the points standings whilst John moves up to fifth with his recent good runs. Points leader Matt Hagan was eliminated in the first round by Blake Alexander.

In Top Fuel, Spencer Massey made his second final in two weeks and went on to take the 12th Top Fuel win in his career, beating out Shawn Langdon in the final.

Massey was able to get down the track better than the Al-Anabi racer, who smoked the tyres off the line. By virtue of his runner up position, Langdon was able to steal back the points lead from Tony Schumacher who was taken out by Massey in round two. Khalid alBalooshi and top qualifier Doug Kalitta also fell to Massey in his romp to the final, whilst Langdon had to get by Tim Boychuk, Bob Vandergriff and Terry McMillen.

“When you’re in Top Fuel, it’s going to be tough no matter what because you have to compete with the best of the best,” explained Massey in victory lane. “Racing Tony in the second round, that felt like a final. Shawn’s been cutting great lights all weekend long, but I was just trying to get the car to the finish line as quickly as possible.”

Australian racer, Dave Grubnic was third quickest qualifier for the event, but lost out to McMillen in the first round.

To get to the finals, Johnson defeated John Gaydosh, Tom Martino, and points leader Mike Edwards.

“We’ve been doing a lot of testing, and the testing is over,” said Johnson. “We’re in race mode from here on out. I think we showed here that we’re running well, and hopefully, we can keep that up going into the Countdown (NHRA’s playoffs over the last handful of events).”

John Hall took his first ever career win by getting around youngster Adam Arana in Pro Stock Bike. It was both riders first time in the final and in the moment, Arana red-lighted handing the win to Hall.

Hall originates from nearby Connecticut.

“It’s just a special time. We needed it, and it came at the right time and close to home,” he said. “We’re just happy to be here. I can’t thank everybody enough. Matt Smith Racing has opened up a door of opportunity for me, and it’s worked out great.”

The win moves him to second in the points battle behind Hector Arana Jr.

A busy period for the NHRA continues with the Route 66 Nationals next weekend at Route 66 Raceway near Chicago, 1000 miles from New England.