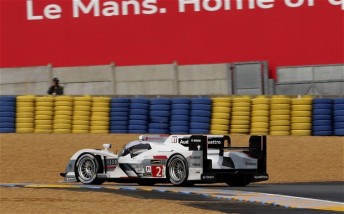 Audi has achieved yet another Le Mans 24 Hour victory after a masterful performance by the number 2 machine of Loic Duval, Allan McNish and now nine time winner, Tom Kristensen on the Circuit de la Sarthe, while Australian John Martin has finished the race on the LMP2 Podium.

The Audi #2 team was dominant despite a late rain storm that descended upon Le Mans which brought some excitement when the Sebastien Buemi piloted Toyota got itself back onto the lead lap with 23 minutes to go and some thought the Audi may have needed a final fuel stop.

In a perfect tribute to “Mister Le Mans” Kristensen’s fellow Dane, Allan Simonsen – who died in the first hour of the race, the lead Aston Martin crossed the line with the top three outright finishers.

“I honour my dad who was been with me all the way through, but he can wait for a tribute as I dedicate this win to a fellow great Dane, in Allan Simonsen,” said Kristensen on the podium, honouring his father who passed away this year.

Frenchman, Duval who, after qualifying the number 2 machine on pole took his first ever Le Mans 24 Hours victory in what was an historic weekend for the #2 team.

“It’s something big, it is huge for all of my family, Tom told me in Parc Ferme last year that I should win Le Mans and I have this year,” said Duval.

Duval has never finished better than fifth at Le Mans previously. Kristensen adds to his stunning record at Le Mans, taking his ninth win – his 12th podium and this is McNish’s third win.

“Without any question it is the toughest race I’ve done here,” said McNish. “The weather and everything else that was thrown at us really made it quite difficult. Allan’s death was playing on the mind of Tom quite solidly but we had to put that behind us.”

Just twice since the turn of the millennium has Audi’s winning sequence been broken – that being Bentley in 2003 and Peugeot in 2009 and it continued on this year.

With Buemi behind the wheel, the Toyota TS030-Hypbrid unlapped itself with 23 minutes to go with a thrilling move, creating a grandstand finish with Mother Nature’s hand to be involved also.

In third was the recovering #3 Audi that displaced the other Toyota which suffered a serious crash with 77 minutes to go at the hands of Nicolas LaPierre, ending any chance it had of standing on the podium. The #1 Audi elevated to fifth at the drop of the chequers behind the Toyota.

In the hotly contested LMP2 category, the #35 OAK Racing machine of Bertand Baguette, Ricardo Gonzalez and Martin Plowman took the win. It was followed by its fellow OAK Racing machine that set the pole time and included Alex Brundle (son of F1 commentator Martin).

It was a miracle that the #35 machine made it to the finish line, let alone win the category after being caught out in the rainstorm with 75 minutes to go. The car went around and had the #40 Boutsen Racing machine join the party.

Australian, John Martin ended the troubled race on the podium with his G-Drive/Delta-ADR team-mates Roman Rusinov and Mike Conway.

Kiwi Brendon Hartley got over the line 14th overall and seventh in LMP2 aboard the Murphy Prototypes machine.

The Manthey team took a one-two in GTE-Pro led by the #92 machine of former Australian visitor Marc Lieb, Richard Lietz and Romain Dumas. The category went right down to the wire, a late pitstop for wet weather tyres by the Aston being the difference, the two marques running shoulder-to-shoulder in the final stages of the race.

With five hours to go, the #99 Aston slammed the fence on the exit of the chicane on the Mulsanne at the hands of the gutted Frenchman Fred Makowiecki, who was sharing with Bruno Senna. The emotionally and physically exhausted crew couldn’t hide their emotion at the incident bowing out while in the lead.

Team Corvette, once the talisman of the GT categories, had one of their most forgettable weekends in France. Whilst all three finished, the three bright yellow cars driven by predominantly young North Americans (including Ricky Taylor who was involved in the memorable startline crash at last year’s Armor All Gold Coast 600) were involved in a litany of regrettable incidents.

Ryan Briscoe’s troubled first run at Le Mans saw the Level 5 Motorsports team bring the car he shared with owner Scott Tucker and Marino Franchitti home in 14th in P2, 43rd overall after a day that saw it in flames on more than one occasion.

The outright win by Audi delivered the 16th consecutive win and 22nd of the 81 Le Mans 24 Hours in total for tyre manufacturer, Michelin. This year’s race also delivered the most number of Safety Car periods in 24 Hour history, but the least number of retirements.

“Competition is much much tougher, it has become a sprint race the whole way,” said Audi Sport Competition Director Wolfgang Ulrich. “It has become a lot more difficult for the drivers with the conditions and you need a crew to react perfectly to that.”

The win by Audi continues a phenomenal performance by the German manufacturer. Such is Tom Kristensen’s record at Le Mans, since debuting in 1997 for Joest with a win, if he hasn’t finished on the podium, he has not finished. It was a bittersweet win for the Great Dane who had his countryman, Simonsen in the back of his mind.

Whilst it was the 12th victory for Audi of the last 14 years, sadly the 90th anniversary race of the Le Mans 24 Hour will be remembered for the death of Allan Simonsen.