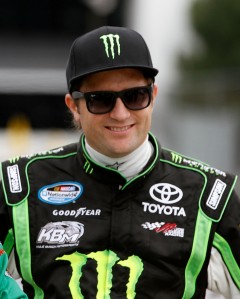 Australia’s Owen Kelly has scored his best NASCAR Nationwide Series result with a fourth place finish at the Johnsonville Sausage 200 Presented by Menards at Road America.

The race was won by AJ Allmendinger from Justin Allgaier and Parker Kligerman.

In what was a true definition of ups and downs, Kelly started the race from second and even was out front at one stage.

Substituting for Kyle Busch, Kelly’s race appeared over when just after halfway he ran out of fuel after not getting a complete tank on his first stop. A full course caution was called and Kelly was pushed back to the pit road by a safety truck. With the road course at Elkhart Lake being so long (6.515km) he got back to the pits, filled the car and beat the pace car to stay on the lead lap.

Back in 32nd, the Tasmanian started to move forward as the final quarter of the race was highlighted with another four caution periods.

As the laps ticked down Kelly jumped up the order. He re-started ninth on the final ‘Green-White-Checkered’ run, passed five more cars including Bryan Vickers and Elliott Saddler.

“It was like WWF wrestling there at the end,” said Kelly.

“Our setup was a little off at the front of the car and having to get back after running out of fuel didn’t help, so to get a top-five finish is good. It keeps my record going.”

The result is one place better than his performance at the same track in 2010 and Kelly will be one to watch when he once again races for Kyle Bush Motorsports at the road course of Mid Ohio on 17 August.