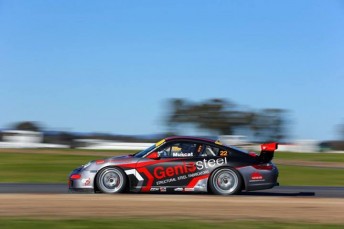 Richard Muscat has firmed as the clear favourite for the 2013 GT3 Cup Challenge crown by sweeping all three races of Round 3 at Winton.

The Victorian didn’t have Race 3 all his own way, however,  with John Goodacre leading the opening laps after a strong start.

Muscat has now won six consecutive races in the series heading into Round 4 at Sydney Motorsport Park.

Elite Class runner Goodacre finished second to Muscat in each of the Sunday races, ensuring the South Australian a comfortable class round victory.

In the Professional Class, Muscat’s fellow youngsters Fraser Ross and Michael Almond completed the round podium.

In the Saloon Cars, Wayne King recovered from a frustrating Saturday to win the second of the weekend’s two 30 minute pitstop races.

King led home Race 1 winner Simon Tabinor by a full nine seconds, taking the round on a countback over his fellow Holden driver in the process.

The Fords of Travis Sharpe and Andrew Nowland finished third and fourth respectively in Race 2 ahead of Harley Phelan’s Holden.

Allan Jarvis emerged from a hotly contested Swift Racing Series round with the overall victory – his first of the 2013 season.

Jarvis had led the field to the chequered flag in Race 2, with rivals Luke Fraser and Ben Grice scoring the wins in Races 1 and 3 respectively.

The Swift Series will continue with the Shannons Nationals at Sydney Motorsport Park on July 12-13 in an event that will feature the Formula 3 Australian Drivers Championship, Australian GT Championship, GT3 Cup Challenge and Radical Australia Cup.