Helio Castroneves wins pole but will start 11th at Iowa

Helio Castroneves wins pole but will start 11th at Iowa 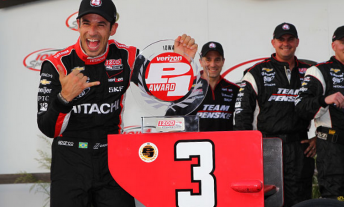 After starting from pole Castroneves won the third heat race to earn a crucial nine points to add to his series lead.

Australian Will Power surged his way into second place ahead of James Hinchcliffe. Marco Andretti, Scott Dixon and Ed Carpenter were next.

Castroneves, however, will start the 250-lap race from 11th after being penalised 10 grid spots for an unapproved engine change to his Penske Chevrolet, handing the #1 starting spot to his Penske team-mate Power.

“We learned a lot today. Tomorrow is obviously a different ballgame. We have more traffic, it’s going to be a little bit hotter. There’s a lot of things going on,” Castroneves said.